pixi.js is a 2D open source library for gaming that includes WebGL support for primitives rendering. Why not to utilize it for polyline renderings on map ? It turned out, however, that the  tesselation of the polylines is not handled well.

I have put sample here:

Another implementaiton of polyline tessellation (seems like more functional) is in mapbox-gl-js  in LineBucket  .Mapbox-gl-js code took quite more time to get it running and debug on Windows platform,I  had to run npm install  from VS command shell and read carefully what all the npm errors are saying (e.g. Python version should be < 3). Then FireFox for some reason haven’t triggered breakpoint on LineBucket.addLine, this took another time to find out that I should debug thi 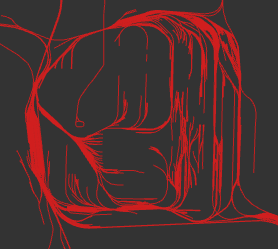 s rather in Chrome.   See the blog here.Anyway good  experience with all the messy npm modules, their install requirements and unnecessary complexity. Also all the npm modules takes more than 200 MB, but some of them are optional in the install.

After all basic LINE draw in WebGL (without the thicknes and styling) is useful too, as on picture above you can see railways in CZ city Ostrava.