quite interesting graph of racing between katastr2 and iKatastr. iKatastr.cz started 10 months later, with big gap in visits against katastr2.cz. Let’s look on the first graph that compares apples to apples – 2 web sites performing the same service – information from cadastral system by taping into the map: 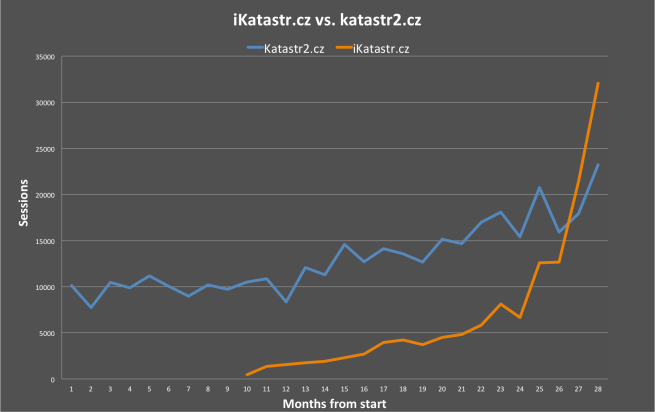 it took 17 months to overcome established and quite popular web site, quite long time even though iKatastr.cz offered from the beginning more functionality  (more maps, less clicks, simple UI) and faster performance.

Lesson learned: even you start later and you are outsider, you can eventually catch up and become a leader !

…but for that you have to use other forms of achieving this and in case of iKatastr this was idea to bring iKtastr not only on web but mainly on mobile devices. We have launched iKatastr on iOS , Android and WP7 and now let’s look on graph that shows overall visit from all iKatastr apps against katastr2, quite impressive. [compare to what you can read here too on Forbes article  : onforb.es/JJlAic ] 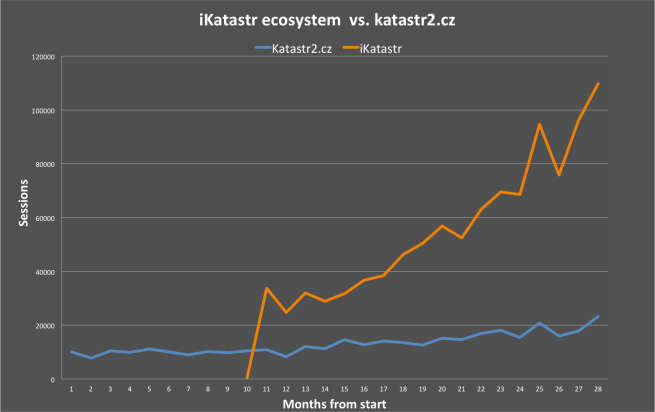 One last note, I was hoping that mobile iKatastr would help to increase visits to iKatastr.cz, but this has never happened, rather SEO optimization is only what makes difference to  increase search results that consequently increases visits.